The Dex the Dragon games were a popular series of mascot platformers on the Giga Drive and Eden consoles. The 16-bit games received fairly consistent 7/10 reviews across the board and built up a small following for the fluffdragon, but like so many other mascot platformers of the era, the series never successfully made the leap to 3D. Following low sales of Dex the Dragon 3D, the original developers declared bankruptcy.

Dex themself decided to make the best of this situation, and quietly left the game industry - resolving to get a proper education and job, settling in to a steady career with IT - helpdesk, sysadmin, and everything in between. 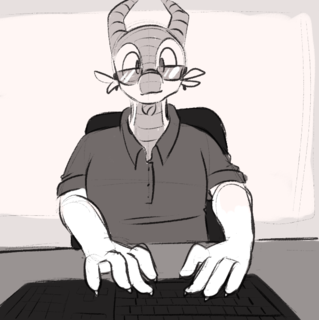 They currently live somewhere in Northern England, working at a company employing many dragons, kobolds, and other scalies. Their apartment is filled with DVDs and games, some general nerdy memorabilia (dragons have to hoard something!), and of course, they keep a few reminders of past glories around as well.

They have some dysphoria over their lack of breasts, and are taking a mild course of HRT.

A lot of weird things tend to happen to them, which they often attribute to the residual effects of cheat codes all this time later. 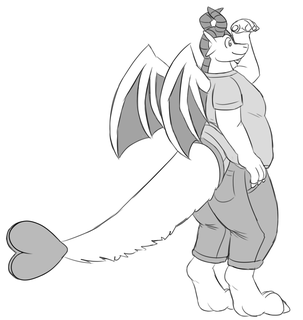 Physically, their most distinctive features are the crossed horns on their forehead - originally used to rappel down ziplines and ram enemies off platforms (and can also work as radio receivers in a pinch).

The heart shaped gem on their tail serves as a general health indicator (the brighter the better, going to flashing just before losing a life), and doubles as a ping pong paddle or hot plate in an emergency. Their tail is prehensile; used for grappling and swinging in platforming days, now used for coiling self up for anxiety and bringing friends into hugs.

Their wings are more for gliding than flying, and are usually kept folded up due to the lack of need to use them. (They do keep a small supply of their old power-ups to fly if needed, but these have a very limited duration).

They are less agile than they used to be - things change when you aren't bouncing on platforms all day - but they are stronger, after walking to work each day and having to help lug servers around. 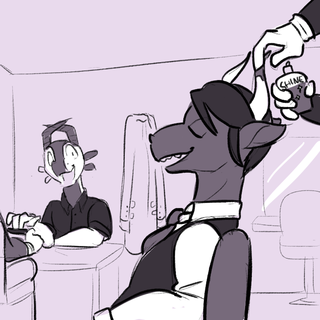 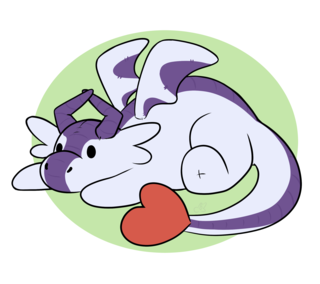 The Dex games didn’t generate a lot of merchandise - but in the 90s, it was fairly impossible to not end up with some kind of licensing deal.

One of the most interesting items is the promotional plush released for Dex 3D - which could be considered charmingly low poly by modern standards. The standard size is quite rare now, but the giant in-store display model is the rarest piece of Dex merchandise now.